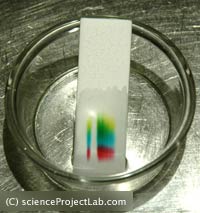 In this experiment we'll use home made thin layer chromatography plates to analyze black pen ink and compare components of this ink to other colored marker inks.

Our hypothesis is that black ink is actually a composition of many color inks and we can separate them and find colored markers correspondent to each ink contained in the black marker.

We'll conduct our ink chromatography experiment in two stages. In stage one we'll find if black color ink is a combination of many inks. If this is true, in stage two we'll try to find if components of black marker are the same as the inks of other colored markers.

For this experiment you'll need (Materials and equipment): 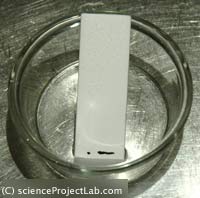 As plate develops you should see something like this:

Note: if you accurately take pictures of your plates from the same distance and angle you can use photos to measure Retention factor (Rf). Also it makes great and safe storage of the data and great illustrations for your project! Make sure you take the pictures right after you remove the plate from the chamber, otherwise solvent front line will fade and it will be hard or impossible to calculate Rf.

We found that black marker ink contains at least three colored inks: Red, Blue and Yellow. Yellow ink was the most mobile in the used chromatography system. We were not able to achieve complete separation of the pigments in our chromatography system and pigment spots were smeared along the plate and overlapping. It's good indication that our system was far from perfect though acceptable as chromatography for kids.

In second stage of our thin layer chromatography experiment we were going to check if pigments used in the black marker (A) and in yellow (B) and red (D) marker are the same. We also were going to find if green marker ink (C) is a simple ink or ink combination.

Thin layer chromatography - overall review. Explanation of principles of the method and some great illustrations of the results professionals can achieve with it.

How to make TCL plates for your science project.